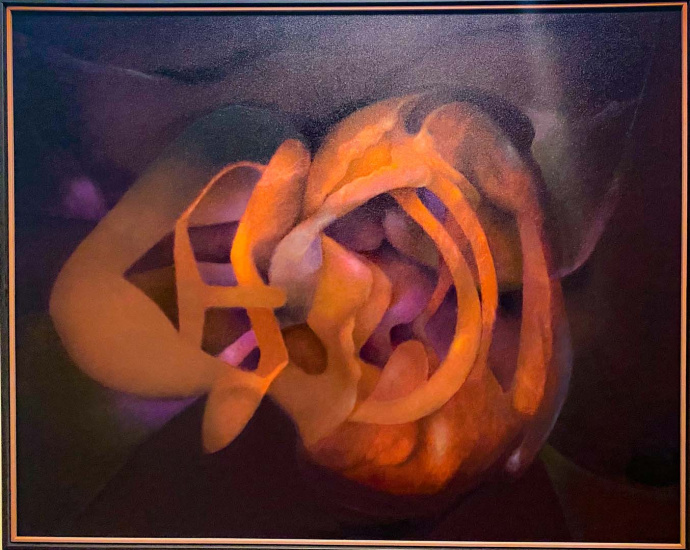 Born in 1920 in the town of Cidra in the province of Matanzas, Rafael Soriano manifested an early inclination for painting.  After completing seven years of study at Havana’s prestigious Escuela Nacional de Bellas Artes San Alejandro, he graduated in 1943 as a Professor of Painting, Drawing and Sculpture.  He then returned to Matanzas where he taught visual arts for close to two decades.  He was one of the founders, and later Director, of the Escuela de Bellas Artes de  Matanzas, the most important art school in Cuba outside of Havana.  During this time, he participated with Los Diez Pintores Concretos known for bringing the geometric abstraction movement from Europe and the Americas to Cuba.

In 1962 Soriano went into exile, settling in Miami with his wife, Milagros, and his daughter, Hortensia. He worked as a graphic designer and occasionally taught, first at the Catholic Welfare Bureau, and later at the Cuban Cultural Program of the University of Miami.  He continued to paint tirelessly in the evenings.

Soriano avoided vernacular themes which dominated Cuban art from its emergence with the first Vanguard in the mid-twenties.  His work proceeded along the paths of geometric abstraction in the course of the 1950s, but by the late 1960s, Soriano’s work took a radical turn.  His brush began to create amazing shapes; abstract expressions related to emotions, feelings, meditations, and mystical introspections.  A novel treatment of light and color, transparencies, and forms placed Soriano in a new aesthetic dimension and freed him from his earlier attachments to schools and tendencies.  Through a highly refined technique, he became a master of luminosity, of the pictorial metaphor and of the metaphysical language of forms. In his amazing and highly complex images, light acts as both form and content.  It is this unity of purpose and means of representation that constitutes Soriano’s transcendental contribution to contemporary visual discourse and elevates his artistic creation to the universal rank noted by many scholars.