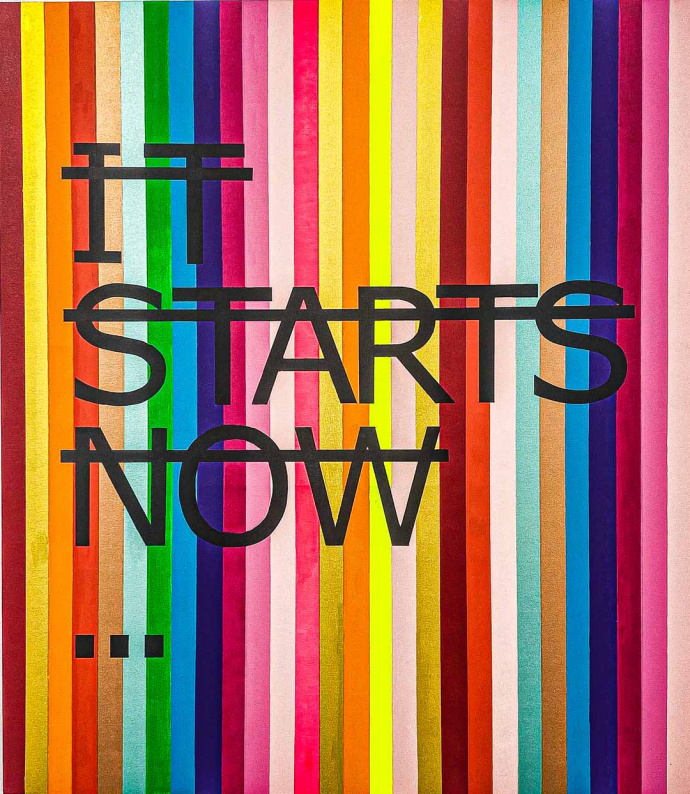 BREACH GALLERY PRESENTS, “THE ART SCHOOL DROPOUT”, A SOLO EXHIBITION FOR CONTEMPORARY ARTIST GIORGIO CELIN AND THE FIRST SOLO SHOW FOR THE ARTIST IN THE UNITED STATES. NEW PAINTINGS FOR THIS EXHIBITION DELVE INTO THEMES OF MYTHOLOGY, RELIGION, AND HISTORY, TRACING NEW NARRATIVES FROM THE ARTIST’S UNIQUE AND MULTI-DIMENSIONAL PERSPECTIVE. CELIN’S WORK IS GREATLY INFORMED BY HIS EXPERIENCE AS AN IMMIGRANT – THE INNER AND OUTER STRUGGLES AND TRIUMPHS INHERENT WITHIN THE DISPLACEMENT OF ONE’S LIFE INTO THE UNKNOWN. BORN IN COLOMBIA, CELIN MIGRATED THROUGHOUT EUROPE AND CURRENTLY LIVES AND WORKS IN BARCELONA, SPAIN. FIRMLY ASSERTING HIS HERITAGE UPON THE CANVAS IS ONE WAY THE ARTIST EXPRESSES A SENSE OF BELONGING, THAT ELUSIVE WAY OF BEING THAT PERPETUALLY COLORS THE IMMIGRANT EXPERIENCE. SURVIVING AS AN OUTSIDER OFTEN MEANS GRAPPLING WITH HIGH EXPECTATIONS, AND FOR CELIN, RECEIVING AN ART SCHOOL DEGREE WAS ONE SUCH GOAL THAT SEEMED PARAMOUNT TO SUCCESS. WHILE EVENTUALLY FACED WITH LEAVING HIS PATH TO COMPLETE HIS HIGHER EDUCATION, CELIN NEVER GAVE UP HIS DESIRE TO RECEIVE A DEGREE – THAT LINGERING ASPIRATION TO BELONG WHICH CONTINUES TO INFLUENCE MUCH OF HIS WORK. THOUGH ULTIMATELY UNABLE TO COMPLETE ART SCHOOL, FOR THIS EXHIBITION CELIN REFLECTS ON THE TYPICAL IMAGERY STUDIED IN TRADITIONAL WESTERN PAINTING. MOTIFS FROM MYTHOLOGY AND RELIGION MIX WITH THE ARTIST’S OWN HERITAGE TO CREATE NEW ICONOGRAPHIES. THE ACADEMIC TRADITIONS ARE ABSORBED AND REBORN IN HIS VIBRANT WORLD. TOUCHING UPON WESTERN FIGURES FROM HISTORY AND LEGEND, HE’S CREATED HIS OWN MYTHIC CHARACTERS, ONES WHO DISRUPT THESE TRADITIONS AND REPRESENT PEOPLE OF COLOR WHO UNASHAMEDLY RECLAIM THE SPACE FOR THEIR KIN. CELIN’S CANVASES SIMMER WITH LIFE, UNRESTRICTED TO ONE TYPE OR KIND. HE ENVISIONS, BOTH CONCEPTUALLY AND AESTHETICALLY, A FLUID HUMAN EXPERIENCE – UNTETHERED TO ANY IDEAS OF HOMOGENEITY. HIS FIGURES FLOW ORGANICALLY INTO ONE ANOTHER AND CREATE STORIES THAT ARE MEANT TO RESONATE WITH OUR PRESENT WHILE WRITING A MORE INCLUSIVE AND UNIVERSAL HISTORY. NAVIGATING UNFRIENDLY WORLDS THAT OFFER ONLY BARRIERS AND DISCRIMINATION, CELIN’S WORK BREAKS FREE OF THESE BOUNDARIES THAT LIMIT THE EXPRESSION OF UNDER-REPRESENTED RACES, SEXUALITIES, AND CULTURES. HIS PAINTINGS BURST WITH ENERGY AND EMOTION AS THEY CONVEY THE STORIES THAT NEED TO BE TOLD AND UPLIFT THE EXPERIENCES OF THOSE WHO LIVE BETWEEN WORLDS.

Mark Jenkins (b. 1970) is a sculptor and installation artist whose work focuses on a variety of urban and social themes, re-defining the limits of sculpture both in the public sphere, where many of his pieces have been found, to the more intimate realm of the contemporary gallery setting. The foundation of his artwork is in the artist’s specific technique, casting objects as well as his own body (and those of others) using conventional packing tape and plastic wrap. Encompassing the actual form of these subjects with his method, he has materialized a range of characters, from translucent ducks, dogs, and babies, to his most well-known clothed hyper-realistic figures.

Whether placed in the street or in the gallery, his sculptures alter perceptions of the ordinary and create surreal settings that infallibly elicit an alternative experience. The placement of his artwork always creates a new form of discourse central to space and the audience. For the pieces he situates in the urban environment, the artist intentionally leaves the sculptures unattended to fulfill their life cycles to whatever end, may it be natural deterioration or confiscation. The viewer’s reaction to his pieces becomes part of the sculptures, turning the street into a stage. The theatricality of Mark Jenkins’s work remains a central theme, wherein he uses the gallery space as a performance platform, incorporating the viewers not only as spectators but as actors themselves.

For the past few years, Jenkins has brought his pieces around the world for a variety of projects and public art events. In 2017, he collaborated with fashion house Balenciaga, displaying his sculptures as part of the opening of a newly designed New York boutique. In 2018, the artist presented a powerful art installation entitled “Project84” where he placed 84 of his figures on top of the ITV buildings at Southbank in London. The installation aimed to bring awareness to the prevalence of male suicide in the United Kingdom. In 2019, he participated in the Rose Béton biennale/art festival held in Toulouse France, where he installed a number of sculptures in the public space, including upon a fountain and hanging on a swing from the Pont Saint Pierre bridge. Most recently, Jenkins placed five of his hooded figures in front of the Laguna Beach City Hall in California. Referred to as “The Caretakers”, the pieces were commissioned by the city, each sculpture occupied with an absurd activity, such as one who appears to be vacuuming the lawn.

Mark Jenkins crosses boundaries with his life-size figures, redefining the limits of what “immersion” can be. With pieces that elicit strong reactions from any audience, the artist chooses to have the pieces speak for themselves. Whether he’s placed them in a public space or in the gallery, the sculptures represent an exploration into human connection – a mirror held up to our understanding of the world. He currently lives and works outside Washington D.C.

RERO. The exhibition, entitled IMAGO, is on view from March 26 through April 23, commencing with an opening reception with the artist on Saturday, March 26th. This will be the fifth solo exhibition for RERO at the Castanier Gallery, marking ten years of collaboration that began in 2012 with his first solo outing in the U.S. Presenting a new body of mixed media work, RERO continues to transcend genres with his provocative text-based pieces.

IMAGO will expound the raw power of words set upon both society’s most humble and grand backdrops. While RERO’s medium varies to embolden the meaning behind his statements, at times rugged and industrial as poured concrete or filled with deep sentiment as resin-covered found objects, for this exhibition he has chosen to conduct a philosophical snapshot of our current moment. Entrenched within a time of extreme change, the artist posits an alternative reality, one that speaks towards a more hopeful and attainable future.

The term “imago” carries multiple intertwined meanings, and this polysemy of interpretations sits at the foundation of RERO’s work for his exhibition. The notion of “imago” is rooted within two main sectors. Latin for “image” the term is both the final stage in the metamorphosis of a butterfly or a moth, the optimal state it reaches through its process of growth and development, and an unconscious idealized mental image of someone, especially a parent or loved one, who influences a person’s behavior or promotes, develops and facilitates change, resilience, and independence. The chosen phrases for RERO’s varied corpus of works circulate around these concepts of change and the chase towards an ideal. Dreams and ambitions mix with skepticism and often sarcasm, where his text delves into the complex psychosis of one who has lived and perhaps suffered, through our modern world.

RERO’s work encourages balance. The ever-present strikethrough of his text is meant as a purposeful obfuscation of his intentions. Rather than lean into the extremes of his text’s sentiments, the artist prefers to leave the interpretation up to the viewer. One need not condone excessiveness or austerity but live somewhere in the middle. A poignant attitude to armor oneself with when faced with the frequent severity of opinions sampled within the pieces’ bold declarations.

Intriguing, luminous, and rich in modern and transgressive poetry, RERO’s works have been presented at the MAC/VAL, the Center Pompidou, the CentQuatre, the Vasarely Foundation, the Grand Palais, and the MAC Bogotá. Full of audacity, his off-format installations have taken root on the dunes of the Moroccan desert, in the heart of Latin America, and in the landscapes of California.