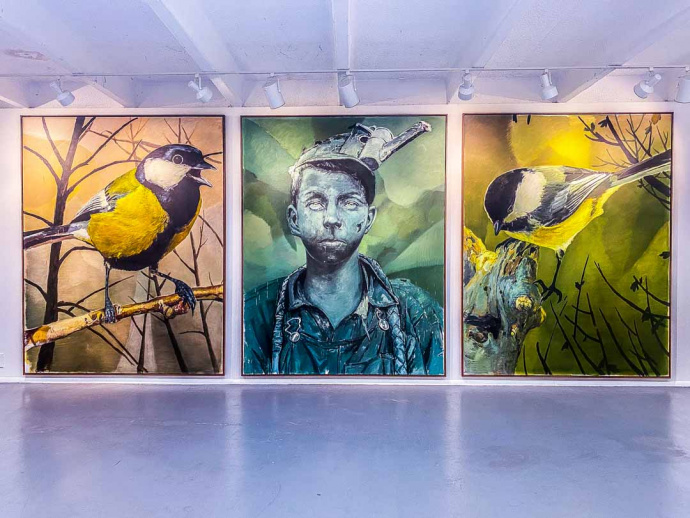 “Through my work, I play with certain iconographic elements that are present in our culture by using decorative objects and toys that were icons for previous generations and now are forgotten memories in the curio cabinets and trunks of our homes. They become part of an identity formed by small fragments that come to be immortalized through these objects that at once make up our history and represent the cultural and political idea of a bygone era.” – L. R.

Lisandra Ramírez was born in Havana in 1986. Her childhood was encompassed by the rupture of the Cuban utopia – the end of prosperity and Soviet influence, the fall of the socialist system, and the resulting socio-economic crisis of the era known as the “special period.” Within this milieu, Ramírez grew up in the Cerro neighborhood of Havana amid a kaleidoscope of colonial tiles, neoclassical and eclectic colonnades, and the rich ornamentation of the former aristocracies.

In the imagination of the child, this space of evaporating artifacts and stories merged with images from Soviet cartoons, toys, and books. As the world depolarized, images seeping in from American and Japanese cultures collided with the visual language of her childhood. In concert with the architecture, furniture, and decorations of the colonial and republican past of the Cerro, these influences had a decisive impact on the formative visual memory of the artist.

From her earliest efforts, Ramírez affirmed that she is a relentless collector of images and objects. In her artistic practice, the child’s object —in most cases reimagined — blends with the remains of historic porcelain, cutlery, and a miscellany of cultural artifacts to illuminate the narrative between reality and a dream world. This tension allows her to mediate a dialogue of distinct relationships between the artisanal and the technological, the past and the present, the current over-explosion of images and information, the public and private space, power relations, fashion, emigration. Ramirez’ work emerges through the memory of her material and visual culture.

In the pieces of the series “El instante que nos une” (The Moment that Unites Us), transparent Plexiglas suitcases contain memory capsules, microcosms of narrative. Among them we find tin soldiers on rope threads or on an old fragment of floor tile with the half-visible drawing of the tile; a diorama-like war map, with a small plane, a rocket, and toy soldiers; or a mirror, on which there is dinnerware modified with resin, small rubber animals and silver cutlery – and where a prominently positioned knife is inscribed with the question “Eternally together?”

In other pieces, the artist recreates classic toys such as the four-wheeled horse or the Japanese cat. She rescales them, both small and large, and reproduces them in an assortment of materials such as bronze or fiberglass before embellishing them with fabrics, mirrors, and plastics to realize her own vision of the world.

Although they are independent, the artist’s works are coherent as a whole, leading Ramirez to become increasingly interested in addressing the potential of spaces on a larger scale. This dynamic defines her personal exhibition, Memories, at Pan American Art Projects from April to June 2022. In it, the artist adorns the walls of the gallery with wallpapers she designed, creating a backdrop for her sculptures, drawings, photographs, and objects. The environment is transformed as a whole, assigning to the viewer the role of witnessing a complete narrative. Rather than citing a specific time or memory, the installation opens the doors to a passage from one geographical space to another, from childhood to adulthood, from the explosion of images that surround us, to a space of calm and beauty. Memories is the invitation of the artist to her visual poem.

Carbon, by Serlian Barreto, curated by Claudia Taboda, is a series composed of work produced over the last two years as a homage to his grandfather, who is a life-long producer and exporter of coal in Cuba. Barreto grew up with his grandfather and has in-depth knowledge of the specific procedures to convert organic materials into coal, to later be used as fuel: from gathering raw materials to the characteristics of the ecosystem in which the burning takes place. His paintings resemble a giant notebook depicting this process: what is often overlooked is magnified through his eyes.
Serlian Barreto was born in Cuba and lives and works in the United States. He graduated from the San Alejandro Art Academy, Havana. His work has been exhibited in several galleries in Cuba, at the Havana Biennial, and at institutions in Naples, Italy. Despite his short career, Barreto is a talented emerging artist who analyzes each of his works with an old-fashioned perspective, much like Renaissance artists: notes, sketches, reference clippings, etc. Most of Barreto’s works are in private and public collections as well as in The Cisneros Fontanals Art Foundation (CIFO), Miami, FL, USA; Jorge M. Perez Collection, Miami, FL, USA; and, El Oficio: Revista de Arte y Literatura Magazine Collection, Havana, Cuba.