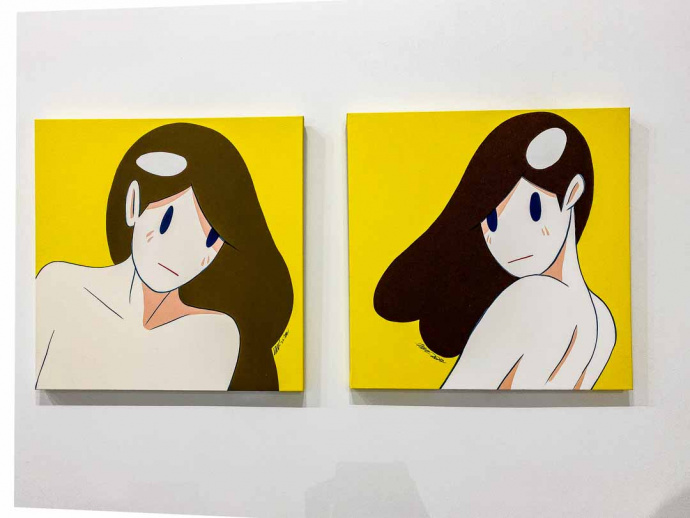 Ascaso Gallery is pleased to announce its upcoming show, Cute Tunes for Serious Sapiens, featuring the work of Javier Martin, Masako Miki, Noritoshi Mitsuuchi, and Takeru Amano, four artists who explore their “inner child” while connecting to a great contemporary dialogue. Escaping the confines of art education and art history hierarchies, they create a bridge between high and low, popularity and singularity, allowing viewers into their private visions through an idiosyncratic yet accessible vocabulary.

The most obvious connection between these artists is the influence of Japanese anime and manga. But that is only a starting point, a generalization, that becomes ever more complicated when the viewpoints of each artist are investigated. For example, Takeru Amano blends classicism and pop culture in his depictions of women from western art history, rendered graphically in the style of Super-flat as defined by Pop star-master Takashi Murakami. Similarly, Noritoshi Mitsuuchi has studied western and Japanese traditions—pop and classical—looking for a certain sense of what he calls “Kawaiism” or Cutism. His paintings bear resemblance to children’s drawings or more correctly, an adult’s version of a child’s imagination as found in coloring books and cartoons.

Masako Miki makes three-dimensional objects that seem at first glance to be merely playful and humorous. Yet, she embraces as a primary influence the animism of Shintoism, such as yōkai or shapeshifters, believing that these folklore creatures presciently foresee today’s interest in nonbinary, transitory beings. And finally, Javier Martin, the only artist here not born in Japan but who has worked extensively in that country, explores a similar merger of old and new with his “Blindness” portraits, combinations of paint, printmaking, and neon. The blast of light before his subject’s eyes might be read as a metaphor for the delusion of mass culture; it also mimics the flash of a camera, blinding even the participants in selfies. Together, this group of four creates an exhibition that is reminiscent of walking into a kindergarten on the one hand, or into dynamic studio practice, on the other.

The strength of this show is precisely that—the way it taps into childhood memories of unfettered creativity. It celebrates the artist’s conscious ability to register images from dreams and the sub-conscience with unselfconscious ease. Or at least, that is true for this quartet of innovators. Collectively, they comment on today’s mass culture which both inflates narcissism and childlike desires as well as threatens to erase the individual and idiosyncratic impulses in art. From the artworks on view, we can see that these brave souls retain their individualism while acknowledging life in a very contemporary meta-world.