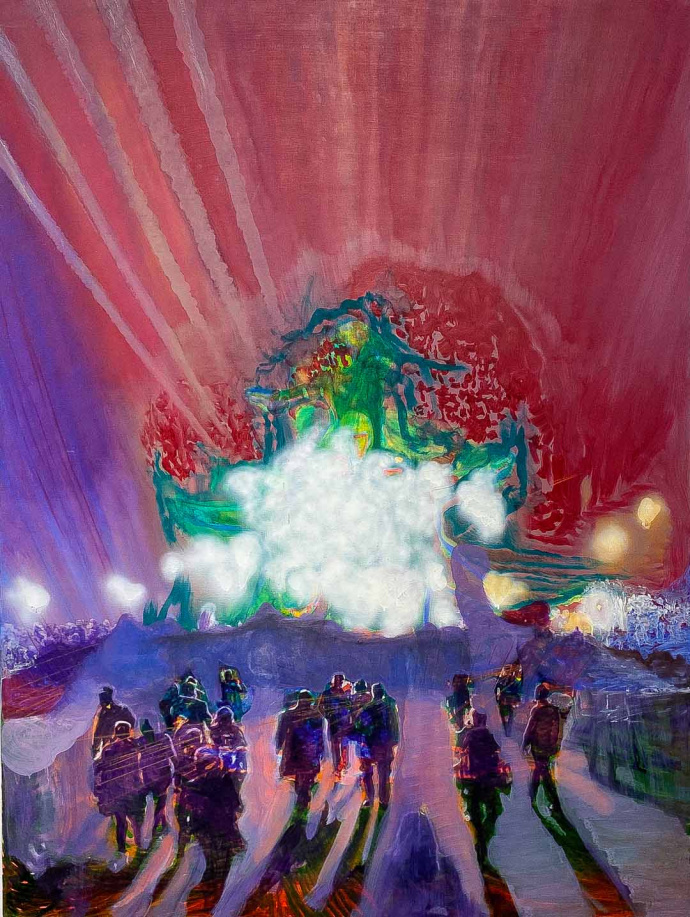 Fredric Snitzer Gallery and Voloshyn Gallery “She Asked, I Followed. Her Name Is After”

The show includes recent works documenting the full-scale war and earlier works that address the geopolitical events slightly preceding the Russian invasion and annexation of Crimea. The artists offer a deep analysis of the meaning, background, and effects of the war, highlighting Ukrainians’ courage, unity, and unbreakable spirit. The presentation focuses on the strength that withstands pain and losses; it is about freedom, which Ukrainians hold sacred.

She Asked, I Followed. Her Name Is After is a project about Ukrainians. It’s about the Ukrainians who do the impossible every day; who woke up at 5 AM on February 24 as one united organism and inspired the whole world to rise; who have their voice, dignity, and unity; who refuse to stay silent; who dare to exist, live and create — in the here and now. It’s about the country that defends its freedom and culture. It’s about the culture that fights for its past, present, and future.

At this show, Nikita Kadan will present new works from the series Cheap Gas, and Cheap Blood, created during the first month of the full-scale war against Ukraine. He worked on them at Voloshyn Gallery, which became his shelter at the time. Letter to a Turtledove is Dana Kavelina’s antiwar poem-letter dedicated to the history of Donbas, “its traumas, anguish, nightmares, dreams, and hallucinations.” Kavelina explores the war through various frameworks, including a feminist perspective, describing rape “as an inevitable result of any military engagement.”

Mykola Ridnyi created his video Seacoast as a response to the Russo-Georgian War 6 years before Russia’s invasion of Ukraine and annexation of Crimea. Filmed at the Black Sea coast, the video depicts a static horizon dotted with figures of fishermen. Scenes of jellyfish splattering on the ground occasionally break the view’s serenity. The main association is the sound of dropping bombs, created with an audio recording of a jet’s frequency. The video conveys the instability and relativity of calmness in a world where military aggression can escalate fast.

Pavlo Kerestey’s paintings address relations between artists and institutions of power, workers’ rights, migrants’ rights, and more. Tackling the image of Armageddon, the artist fills his paintings with fire. And Vlada Ralko will present her Signs series, addressing identity issues within a socio-political context while delving into the existential pain and suffering of the collective body politic

Ralko’s Signs series remains one of the most important projects of the artist’s career. The works resist unambiguous interpretations, at least ostensibly. When Ralko began working on them in 2008, she anticipated the question, “What does this mean?” Instead of explaining, she offers decontextualization as a challenge and element of vulnerability. Ralko attempts to put her audience through a U-turn, creating a vicious circle: where each question without an answer produces more doubt. These works depict something like a break, something that comes outside by damaging the body from the inside.

Lesia Khomenko will present her works from the Congenial Work series, analyzing the doctrine and term coined by the Ukrainian idealist philosopher Hryhoriy Skovoroda (1722–1794). Khomenko brings this notion to the present context and attempts to integrate it into the field of critical discourse by juxtaposing it to the still relevant Marxist idea of “alienated work.” The figures of workers are inscribed into the image, leaving the impression that the painting is “too small” for them. Their legs rest on the painting’s edge while their heads are squeezed into a corner; sometimes, they don’t even fit into the painting. This formal method is a metaphor for the social and economic conditions that the workers currently face. The base in soft colors serves as the background for these figures. For Lesia, these neutral colors of “cutting-edge interior design” symbolize illusory happiness and material well-being. The juxtaposition of these colors and the “squeezed-in” workers lends the painting dramatic tension.

Oleksiy Sai’s new works portray tin soldiers in business suits. The series explores the emergence of office plankton as a class. His characters are faceless managers that become more human and individualized as they age and depart from the ideals of consumerist society. It is worth noting that Sai creates a markedly neutral and objective representation of the lives of office workers in every facet. The artist doesn’t intend to critique or parody the corporate lifestyle.

Maria Sulymenko’s watercolors from Glass World of People and Things… are simple, succinct, and mesmerizing. The events depicted in them look like slow-motion reels or figures frozen in a vacuum; the viewer is plunged into the atmosphere of translucent grey air. The artist has arranged every possible detail with a delicate touch and perfectly sharp vision, but the public still gets a sense of spontaneous improvisation. The characters of Maria’s drawings exist outside of any concrete era and are placed in a generic, sometimes naively conveyed environment that alludes to our subconscious rather than to our reality.

Daniil Galkin’s Doormats (or One that has been caned carries the one who has not been) series portray illustrations of guidelines for transferring and evacuating injured persons. The second title of the project derives from a proverbial expression referring to the folk story “The Wolf and the Fox,” a fairytale playing up a situation where an injured one acts as a donor for their captor. Which literally illustrates the war crimes of the Russian Federation against Ukraine under the pretext of saving the Ukrainian people from “fascists,” which the occupiers-liberators themselves are.

In Taste the Feeling, from his Simple Things series, Yevgen Samborsky reflects on the genre of landscapes through the framework of the practice of painting en Plein air, where intrusions into the environment manifest various hidden contexts or develop new ones.