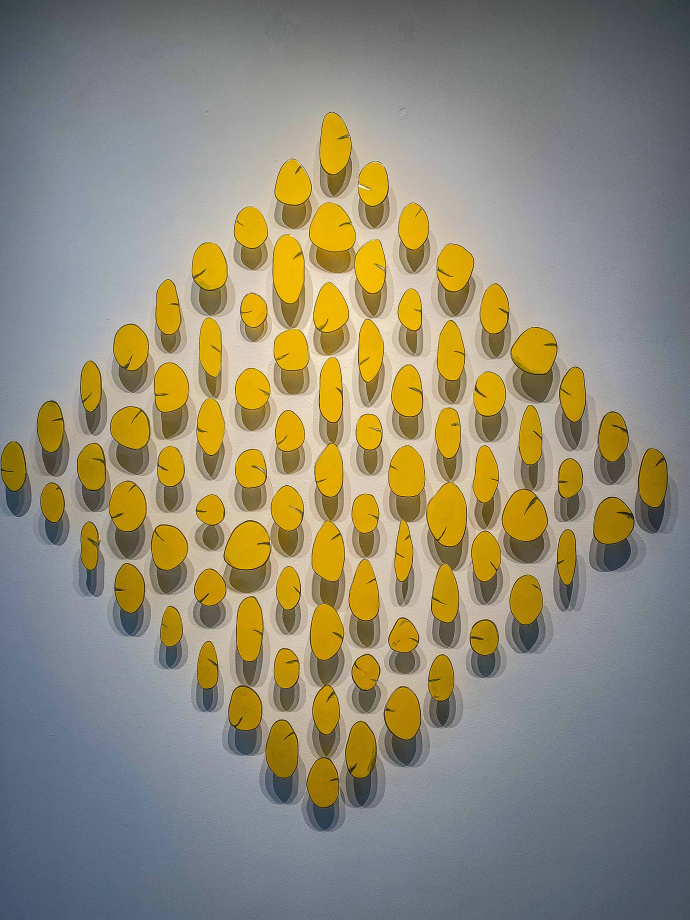 In this exhibition we are delighted to bring together three prominent women artists from three regions of the Americas.

The work of these three artists turns stereotypes on their heads both in terms of gender and geography. In the United States we tend to be myopic in thinking only of ourselves as “American”, negating the reality of a long history of civilization to the South. Instead we celebrate here the diversity of the Americas, which has been a longstanding mission of our gallery, by exhibiting concurrently Carolina Sardi from Argentina, Mabel Poblet from Cuba and Carolyn Mara from the U.S.: three “Americans”. The way that these three artists work also turns on its head the gender stereotypes associated with women. The work that these three women produce has a physicality to it which belies any stereotypes of the “fairer sex”.

Sardi was born in Argentina and was educated at the National University of La Plata, in Argentina, then studied with the sculptor Ennio Iommi. Sardi has been commissioned for several site-specific large scale installations in many of this city’s acclaimed buildings and private homes, including most recently the newly finished Apogee Hollywood condominiums and the Icon Bay project. She has also been included in the prestigious Heavy Metal exhibition at the National Museum for Women in the Arts in

Washington, D.C. She plays with the effects of volume, light and shadow, adding to the work another layer of possibilities. In a recent series she uses polished gold, copper, or chrome surfaces, in which the viewers can find their own reflections, thereby introducing a variety of added readings.

Mabel Poblet was born in Cienfuegos in 1984. She graduated from the National Academy of Fine Arts with highest honors. She apprenticed in a workshop started by Cuban installation artist Tania Bruguera, an opportunity that brought her together with many of the best known Cuban artists of the day. Poblet’s works are a close examination of her own life – who she is as a Latina growing up in Castro’s Cuba, where she came from, her relationship to the Cuban culture overall. Mabel Poblet’s work can be seen in public collections such as the Contemporary Art Museum of Tampa (FL), the Cisneros Fontanals Art Foundation in Miami (FL) and the Gilbert Brownstone Foundation in France. She represented Cuba at the Cuban Pavilion at the 2017 Venice Biennale.

Carolyn Mara was born in 1979 in Houston, Texas, and was raised in an Italian family. She began her photographic interests during her years at the Sacred Heart School in Houston. She earned her BSc in Psychology with a minor in photography from Southern Methodist University (2002) and an MFA in Photography, video, and related media from the school of visual arts in New York City (2006). Her large-scale abstract paintings are created from a series of throws and strokes made with a mop. She currently sells her mop paintings and is represented by Pan American Art Projects in Miami. Carolyn has exhibited in multiple gallery spaces in the United States, at PhotoFest Houston, been published in PDN magazine, Saplings Magazine, and B&T Australia.

Pan American Art Projects was established in 2001 with the mission to exhibit and promote established and emerging artists from North, Central and South America, providing a context for dialogue between the various regions. We represent a strong roster of contemporary artists of the Americas and hold a collection of important works from Cuba, Argentina, the U.S. and the Caribbean. Our programming reflects these complementary arenas providing a comprehensive historical context for contemporary tendencies in the visual arts from these regions. We opened our gallery in Dallas in 2001, expanding to Miami in 2006 with the opening of our pioneering space in the Wynwood Arts District. In 2016 we moved our collection and gallery exhibition spaces to the Little River/Little Haiti arts district, where we produce exhibitions of our represented artists as well as historically framed collective exhibits mostly from our held collection.