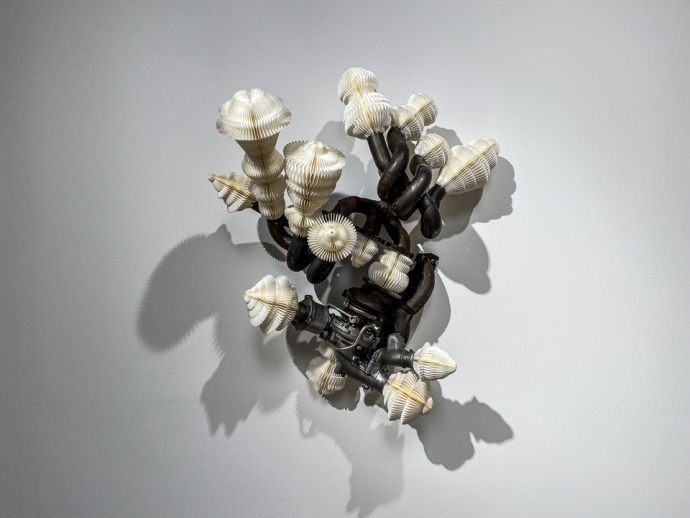 Piero Atchugarry Gallery is pleased to announce Rhizome, contemporary Japanese sculptor Keita Miyazaki’s inaugural exhibition in Miami. Paradoxically biomorphic and otherworldly, Miyazaki’s sculptures converge the bulk of discarded car engines with the weightlessness of folded paper and sewn felt. Keita Miyazaki (b. 1983, Tokyo, Japan) has studied craft metal casting for over a decade, earning a BA and MA from Tokyo University of the Arts, Japan (2003-2009), an MA in Sculpture at the Royal College of Art, UK (2011-2013), and a Ph.D. from Tokyo University of the Arts, Japan (2013-2015). The artist currently works between Tokyo and London. His works are part of numerous private collections in the UK, Japan, USA, Switzerland, and UAE. Museum and corporate collections include; Daiwa Foundation, Mori Arts Center Japan, Aoyama Spiral Hall Japan, Ogi Kankou Ltd, Sado Island, Niigata Prefecture Japan, Mortimer Collection London. In 2015 a monumental work by Miyazaki was selected for the Sculpture in the City exhibition in London. His works have also been featured in the 2017 Venice Biennale and at the Palais de Tokyo in 2018.

Rhizome, named for the continuously growing horizontal stem which enables plants to survive unfavorable conditions underground, suggests a post-apocalyptic ecology in which man-made relics are not overgrown by nature, but rather hybridized with and animated by the earth. Miyazaki’s decade-long study of traditional metal casting eventually led him to see car engines as a great formal and conceptual avenue to consider contemporary society and the impact of capitalism. The artist welds sections of discarded car engines into untellable forms, evoking novel organisms born in the afterlife of a global economy. Brightly colored layers of paper and felt – folded in pleats, honeycombs and fans – emerge from the metal pipes like flowers budding in spring. Some sculptures are free-standing while others appear to grow out of the walls, simulating a whimsical grove of new species evolved from the fallout of radiation and pollution. The individual titles of the works– Double Standard, White Territory, Universal Disorder –remind us that what initially strikes the viewer as playful and eclectic speculation for the future is grounded in a more somber reality of today’s present social and political landscape. Like a plant struggling to sprout through concrete, Keita Miyazaki’s Rhizome is, at its core, a reminder of the cathartic power of beauty and poetry.

Lives and works between London and Tokyo.

Miyazaki studied at Tokyo University of the Arts, Japan (2013-2015) and at the Royal College of Art, UK (2011- 2013). He also completed a PhD in craft metal casting in Tokyo. During the summer 2017 Miyazaki was the selected Artist in of the Vannucci Artist Residency in Città della Pieve (Italy). His work has been presented in numerous shows in UK and Japan, including the Victoria and Albert Museum and the Daiwa Foundation in London. In 2015 a monumental work by Miyazaki was selected for Sculpture in the City exhibition in London. His works were presented in the exhibition ‘After the Deluge’, at Palazzo Sant’Apollonia during the Venice Biennale 2017. In July 2018 he presented his works at Galleria le Prigioni, Treviso, part of the Benetton Collection.