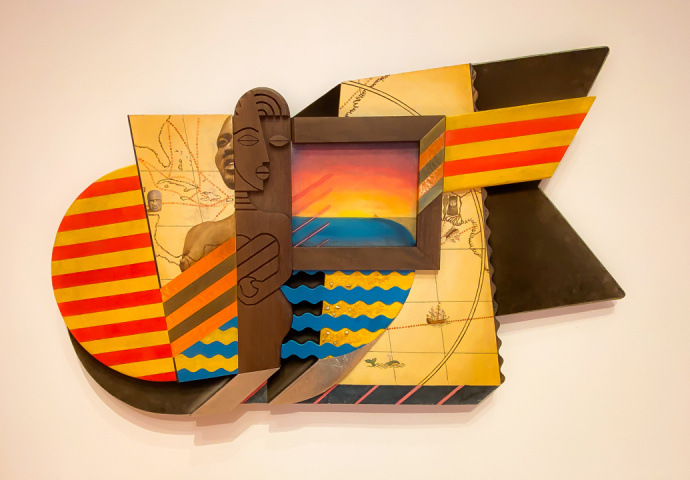 For decades, Coconut Grove has attracted artists, writers, and musicians. The Frost has chosen to tell a story of a moment in the Grove’s rich history through a select group of visual artists. The creative life of the Grove sprang from the vibrant people who chose to create in this Miami neighborhood. It is not a single artist or group of artists but the spirit of a community that has contributed to the Grove’s reputation as a wellspring of creativity.

In Miami, neighborhoods change rapidly, and populations shift and swell like the rising sea level. Place and Purpose: Art Transformation in Coconut Grove celebrates the role of a community as a creative space as well as a key driver behind a young city’s evolution. Coconut Grove established itself in the 1960s as the local haven for a diverse group of artists, writers, musicians, and art galleries.

In historic Bahamian West Coconut Grove, the Miami Black Arts Workshop (MBAW) provided a community space for Black artists. Some of the artists represented include Roland Woods, Jr., Robert McKnight, Donald McKnight, Dinizulu Gene Tinnie, and Pamela Kabuya Bowens-Saffo, among others. Community activists, as well as artists, these leaders created a powerful space in Coconut Grove through the MBAW, a venue that welcomed young people to learn about art and activism.

The Grove’s rich history has contributed to the complex narrative of Miami as a home for myriad cultures and the arts that define and shape our experience of them. Community events such as the Coconut Grove Arts Festival (dating back to 1963), the Goombay Festival (established in 1977), and the King Mango Strut Parade (founded in 1982) became signature events of the Grove that continue today. While most art galleries have long since moved out of the Grove and today’s prohibitive real estate prices discourage artists and musicians from living in the Grove, the neighborhood’s history as an artistic mecca remains its legacy in Miami.

This exhibition was made possible with generous support from the John S. and James L. Knight Foundation, the Art Dealers Association of America Foundation, The Andrew W. Mellon Foundation, PNC Bank, the Office of Commissioner Ken Russell, the Coconut Grove Business Improvement District, and the members of the Patricia & Phillip Frost Art Museum.