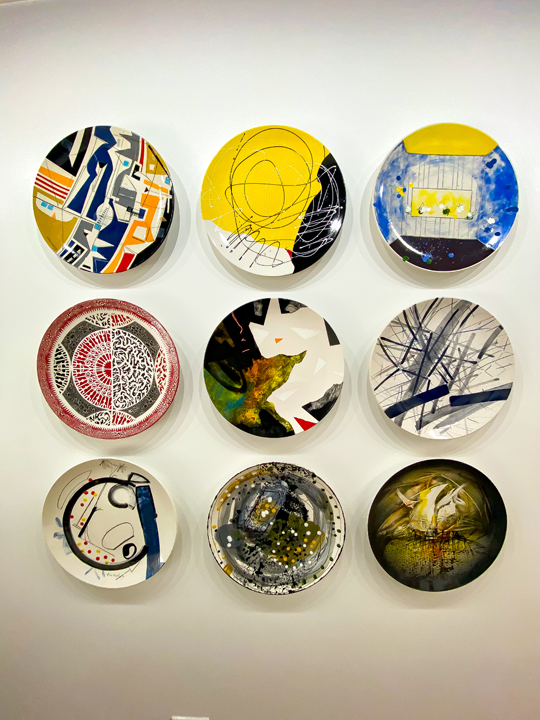 FINE ARTS ON THE PLATE

Some of the artists that make up this exhibition will be:

The word “ceramic” comes from the ancient Greek “kéramos,” meaning “potter soil,” a clay made of inorganic composite material.  The clay is very malleable in its natural form but becomes stiff after drying or firing.  The technique of firing clay began with utilitarian objects for prehistoric society. Over the years, people learned that clay could change color depending on the mixture’s different oxides and that it could be coated (glazed) and decorated.  Soon, crude pottery was transformed into more substantial objects of varied shapes and suitable for painting.  Decorated pottery was probably initially used for ritual purposes or as receptacles for offerings for the dead.  The designs were simple markings, perhaps made with a stick into wet clay for purely aesthetic effects.  With the growth of complex societies, the necessity for ceramic objects increased and moved beyond the utilitarian.  Makers became more skilled at shaping and painting.  People associated their designs with a symbolic language that reflected a spiritual belief system and cosmic worldview.  Over time, the purpose of objects made from clay changed to become independent works of art.  In Cuba, ceramics were produced on and off the island beginning in the 19th century to highlight the natural beauty and illustrate its history and culture.  Today, they continue to reflect society’s complexities as artists move beyond the merely decorative, joining the island’s renowned artistic practices with generations of superb ceramic craftsmanship and integrating a modern vision into the media.

This exhibition of ceramic plates by more than 50 Cuban artists accomplishes many things.  It marks a continuation of Cuban ceramic traditions achieved by various artists in different stages of their careers and levels of experience.  They all respect the media and use the many techniques involved in shaping and firing to create unique pieces, often experimental.  The artists’ aim was to use ceramics to continue a personal aesthetic and style while integrating the familiar into new circular forms.  For generations, artists have realized the change from images on flat surfaces to working in the round was challenging.  Losing the frame required a new perspective on compositional formatting and design arrangement.  The circle also necessitated a certain amount of visual control as the eye tends to move away from a central focal point.  How the artist deals with such formal elements in creating his/her work results in an exciting exhibition.

Each plate displays a wide range of styles, from figurative to abstract to realistic to surreal, and more.  There are intuitive designs, portraits, and geometric puzzles, strange characters, and fantasies.  Just as one would expect from a very diverse group of artists – each one is unique, provocative, and extremely well-crafted.  Although it is impossible to include every piece in this short essay, some highlights indicate the creative solutions artists found for their plates.

Ramon Alejandro’s organic forms mimic the plate’s circular format, spiraling like tiny tadpoles or as seeds blown by the wind, often in a frenzy as they move round and round.  Lia Galletti plays with dancing lines and bold color fields.  Similarly, Rigoberto Mena spontaneously uses a painterly approach to line and color for all-over effects.  In quite the opposite of natural shapes, Nestor Arena’s images are starkly geometric and threatening in their exactitude as they attempt to interrupt the circular frame.  Such precision of geometric patterns turns kaleidoscopic on the plates of Carlos Cardenas.  Meticulous drawing already embedded with circles forms tricky patterns that reveal optical surprises in the art of Carlos Estévez.  The monumental characters that have become recognizable in the ritualistic narratives of José Bedia appear to exist quite naturally in a circle, following its contour from land to sea.  The stories continue in the work of Carlos Luna, who has carefully abstracted imagery based on Cuban reminiscences into curving shapes to complement the plate.  Another cast of creatures reminiscent of Spanish bestiaries floats in the purgatory invented by Aisar Jalil to rival the strange beings imagined by Renerio Tamayo.

Other artists prefer to challenge the circle and impose bizarre new imagery within its space.  Ivonne Ferrer is always looking for puzzling combinations in her subject matter, and the plates are no different.  They become relief-like objects with the addition of odd baby heads.  Aldo Menendez also experiments with the application of ceramic accumulations to take the surface into a new dimension.  Some artists prefer to adopt a more realistic style, with portraits and figures included to enhance patterns and designs.  Patricio Rodríguez takes advantage of the plate’s entire surface for the natural world to morph into abstract patterns.  For Ciro Quintana, a Pop Art aesthetic introduces comic book characters in vibrant colors that scream from within the circle’s deep space.  Pop Art goes to outer space with Pedro Vizcaino and his fantastic repertoire, and Alfredo Sosabravo has a quieter approach to imagery simplified for unique visual effects.

All of the artists have met a new media challenge and a new format to produce an outstanding exhibition.  While many have worked with ceramics before, this has been an opportunity to showcase their works within a community and further explore an historic feature of Cuban art history.

FINE ARTS ON THE PLATE

​Sponsored in part by the Miami-Dade County Department of Cultural Affairs.