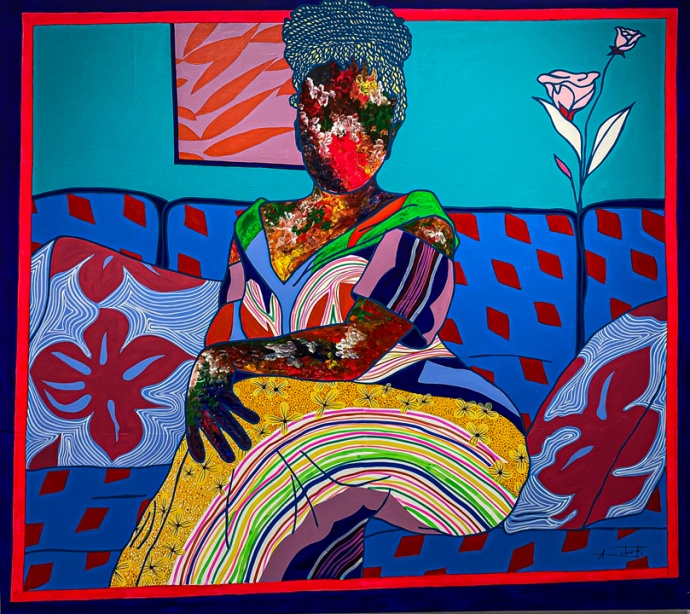 Fredric Snitzer Gallery is pleased to present Sweet Flowers of Douala, Ajarb Bernard Ategwa’s first solo exhibition in a US gallery. The exhibition consists of a new series of portrait-based paintings celebrating the women of Cameroon. This celebratory energy is evident not only in the individuality of each presented subject but in the use of brightly, fluorescent hues of the paintings and patterned motifs they are wearing.

Ategwa offers a local perspective on modes of self-representation in Cameroon today, portraying the strength and individuality of each subject in his paintings. The use of portraiture is reminiscent of black and white studio portraiture popular across countries in post-independence Africa, as well as a contemporary selfie culture. The use of this “lens” marks ascendance, status, and abundance.

Within this new series, there is also an apparent contrast between traditional and contemporary iconography. Each subject is dressed in either traditional garments or references more contemporary reinterpretations of African wax fabrics. Clothing holds importance within African society and the artist’s use of African wax fabrics within this new body of work showcases the impact and power these materials have. African wax fabrics are known for their ability to tell stories unapologetically through the use of bold designs, creative patterns, and bright colors. Often used as a type of non-verbal communication amongst its wearers, these textiles conveying certain messages or represent a specific culture connecting people to politics, religion, culture, and traditions.

What is also visually evident are the paintings overall graphic quality. The artist’s use of bold lines to block out flat shapes and color to draw the viewer directly into the subject is an attribute to the artist’s background in billboard painting. In stark contrast to the artist’s hardline execution, he introduces a new painterly watercolor element that holds back the portrait’s full disclosure.

Sweet Flowers of Douala expresses the energy of the West-Cameroonian artist and his surroundings by capturing the wealth and vitality of the people with whom the artist is surrounded.

Ajarb Bernard Ategwa was born in 1988 in Kumba, Cameroon. His recent series of portrait-based works construct an image of Cameroon and of Cameroonian people. Ategwa lives and works in Douala, Cameroon’s largest city, which has had many foreign influences in the past and more recently an influx of migrants from within the country and neighboring regions. This has shaped Douala into a vibrant and colorful metropolis that is the source of Ategwa’s art. Ategwa’s painting style is based on complex line drawings on canvas, which are executed free-hand. They imply a movement and momentum reflective of his rapidly transforming city. Previous exhibitions include Peres Projects, Berlin; Espace Doual’art, Douala; the Cameroon National Museum, curated by Simon Njami; and Jack Bell Gallery, London.