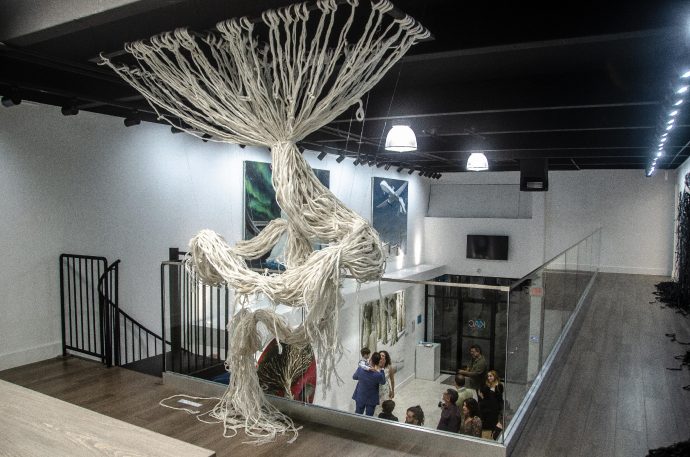 A forest of shelters—birdhouses clustering across trunks—a scene oneiric and theatrical, onto which a man in a suit is entering.  We see him from behind, onstage.  We watch and follow, conjuring the intimate possibilities of the fantastic as a kind of personal real.  The proscenium between observer and scene in Figueroa-Beltrán’s recent paintings are the pivotal conceptual boundary between his imagination and ours, a stylistic trait he has inherited from Surrealism and the various expressions of poetic realism in Latin American art. Midnight marks the temporal boundary between two days, but at that instant we are in both simultaneously.  Likewise, these paintings mark how the complexities of any passage overturn the linear rules of quotidian time and experience.  An iceberg on its implacable journey echoes the towering arcs of an expressway and the cold fires of the aurora borealis.  In these paintings metaphor binds only to separate its components.  Juxtaposition devoid of similitude revels in incongruity—orchids and jellyfish reflect on an astronaut’s helmet, a windmill ablaze rises from a calla lily.  And, in a recent return to a fusion of found-object sculpture and painting which typified his earliest works, car doors propped upon other auto parts become the support for images that boldly impose the logic of incongruity on trope and common experience alike.  In these works, the real becomes personal by an act of will, not through intuition or discovery.

Ouroboros, from the Greek word meaning “Tail Devourer” is one of the world’s most ancient symbols. The circular serpent endlessly eating its own tail to sustain life is a symbol of infinity and the cyclicality of life and nature. To Allison Kotzig, the pelvic bone is the perfect illustration of the Ouroboros; an object irrevocably linked to death and yet, at the same time, the architecture of conception, the house of the womb, and like the world serpent it fosters life from death like the budding soil after a charring flame, an ever-existing rotation of creation from destruction. The works’ raw nature similar to that of the “Venus of Willendorf,” is a primordial, holistic emblem of the purity of the divine feminine and communicates Allison’s exploration of feminine power, the wild untamable beauty of nature and the metaphysical structure of time and eternity. Her intimate installations represent the duality of all things made tangible and visible, a beautiful deconstruction of social justice using an antiquated character with strong ties to the feminine in ancient cultures spanning thousands of years: the world serpent is the guardian of life, born from Angrboda, a beautiful giantess, and like the 9 realms in Norse mythology, Ouroboros in this series represents the underlying foundation of the universe and the pillars of life.

Process is an important part of Adrián Menéndez practice as each painting can change many times before reaching its final version. In the process, the artist experiment with the selection and intensity of colors as well as with the intentional clash between the free brushstroke of the gestural painting and line drawing. However, the author of Pulse, M11 train Bomb, 9/11 and Sandy Hook Locker does no make art in a vacuum confining abstract art to formalism. The Fluorescent Black series is part of a larger body of works dealing with violence, suffering, memory and the social turmoil of American reality. This series takes inspiration form a long list of violent acts including terror attacks and mass shooting whose frequency has increased exponentially in the last decade. In an act of synthesis that aims to capture the ephemeral nature of memory, the artist eliminates all circumstantial elements to leave only traces of the crime scene. The fine lines recreating a bar countertop, a window or a door, and the vibrant acrylic or natural colors are remnants of the tragedy.  For Menéndez, the tragedy of our time goes beyond each carnage to involve the desensitization effects of being continuously exposed to violence through the media. As an educator himself, the artist communicates his concerns about the future making a point on the time constrains and other issues faced by the America families at large. His original approach to materials is combined with a philosophical message about violence, segregation and other social matters that link this series of paintings to his performances, video and other digital works.