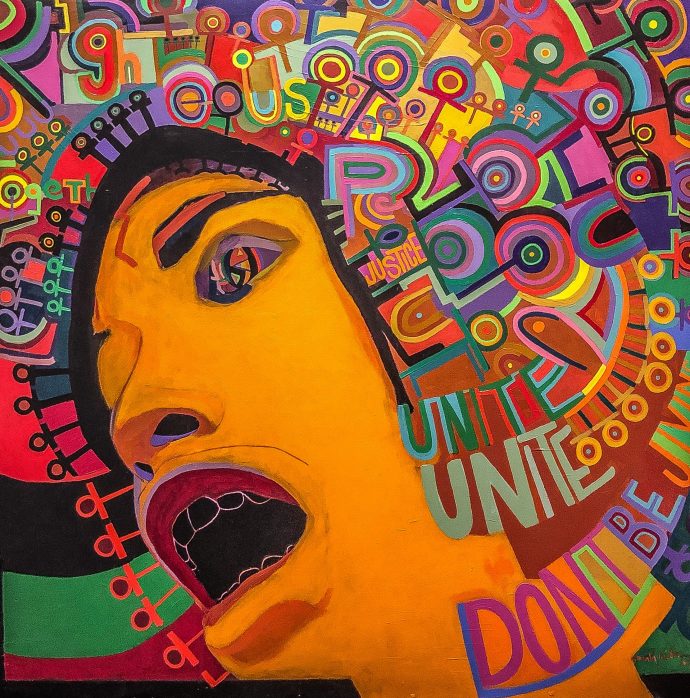 AFRICOBRA: Messages to the People

MOCA presents a groundbreaking exhibition celebrating the founding of AFRICOBRA – the Black artist collective that helped define the visual aesthetic of the Black Arts Movement of the 1960s and 1970s. This year marks the 50th anniversary of the collective, which came out of Chicago.

Art is a tool: a visual language, an experiential form and a revelation. When art successfully combines all of three of these characteristics, it speaks to and moves those who encounter it. The artist collective AFRICOBRA exemplifies these traits while defining for themselves how they want their art to function in the world.

Founded in 1968, by Jeff Donaldson, Jae Jarrell, Wadsworth Jarrell, Barbara Jones-Hogu and Gerald Williams, AFRICOBRA, which stands for the African Commune of Bad Relevant Artists, created images that defined the visual aesthetic of the Black Arts Movement. The artistic movement was a complement to the Black Power Movement that centered the liberation of Black people, taking up and extending the arms of the Civil Rights Movement. The founders, like many artists of the 1960s and 1970s, understood that their artistic voices could contribute to the liberation and continue unifying the Black community as a whole.

On the occasion of the collective’s 50th anniversary, AFRICOBRA: Messages to the People brings together the founding artists with five early members: Sherman Beck, Napoleon Jones-Henderson, Omar Lama, Carolyn Lawrence and Nelson Stevens to look back at their early contributions to the shaping of AFRICOBRA while presenting the artists’ current works of art. These ten artists provided an artistic foundation from which the group evolved over time through the guiding philosophy of art for the people, art that appeals to the senses, and art that is inspired by African people. The artists presented this as a unit in the exhibition Ten in Search of a Nation organized by the Studio Museum in Harlem.

With Ten in Search of a Nation as the framework, the show at the Museum of Contemporary Art North Miami will introduce the foundational work of one the longest organized artist collective and the ways in which they used a visual aesthetic as a tool to act: communicate with their community, resist mainstream narratives about Black people, and encourage unity through community. Through a selection of mixed-media works, installation, archival documents and photographs and oral histories, AFRICOBRA: Messages to the People will also connect to the Miami as a place, by extending an invitation to the community to participate by sharing their stories from the Black Power period, ways in which community exists for them in the city, and stories of family.

Curator Jeffreen M. Hayes earned a Ph.D. in American studies from the College of William and Mary, a Master of Arts in art history from Howard University, and a Bachelor of Arts in humanities from Florida International University. She is currently the executive director of Threewalls in Chicago, and has previously worked at the Birmingham Museum of Art, Hampton University Art Museum, the Library of Congress and the National Gallery of Art. Her curatorial projects include “Intimate Interiors” (2012), “Etched in Collective History” (2013), “SILOS” (2016), “Augusta Savage: Renaissance Woman” (2018), and “Process” (2019). She was a guest curator for Artpace San Antonio’s International Artist in Residence Program from May–August 2018.

AFRICOBRA: Messages to The People is made possible with the generous support of Miami MoCAAD, Miami Museum of Contemporary Art of the African Diaspora. Additional support is provided by Lehman Autoworld and Kavi Gupta Gallery. The forthcoming catalogue is made possible, in part, by the Elizabeth Firestone Graham Foundation. MOCA’s exhibitions and programs are made possible with the continued support of the North Miami Mayor and Council and the City of North Miami, the State of Florida, Department of State, Division of Cultural Affairs and the Florida Council on Arts and Culture, and Miami-Dade County Tourist Development Council, the Miami-Dade County Department of Cultural Affairs and the Cultural Affairs Council, the Miami-Dade County Mayor and Board of County Commissioners. ​