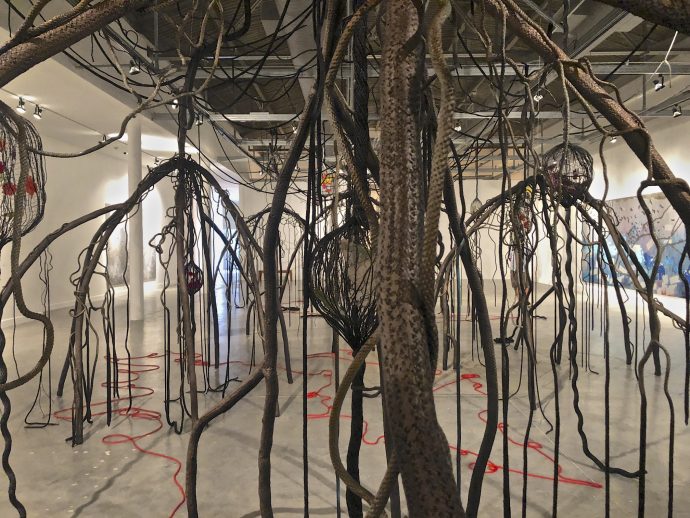 In Greek Mythology, Ariadne’s Thread was a tool that helped Theseus make his way through a complex labyrinth guarded by a vicious

minotaur. As Theseus entered the maze, he unraveled the red thread given to him by Ariadne, conquered the minotaur, and followed the thread back out to victory. The exhibition Tracing the Red Thread, a large-scale multi-media installation by Mira Lehr will pay homage to the metaphor of navigating through complex systems found in nature in search of personal insight. A site-specific marine rope will wind through the main gallery transposing a pattern of mangrove roots into a vertical cathedral-like structure that culminates in the center. Traces of the marine rope will be included in the exterior galleries as a sort of “Ariadne’s thread” that guides the viewer and connects the labyrinth to other works in the show.

The mangrove structure will engage the general public in the meditative experience of walking a labyrinth while bringing attention to the fact that these native trees are at risk. Overall this exhibition will reflect on nature’s beauty and themes of personal discovery while promoting a sense of reverence toward our environment.

about a month ago

Artist Mira Lehr describes environmental damage as “a misuse of the earth in a way that I don’t think would happen if women were more in charge of running things.”