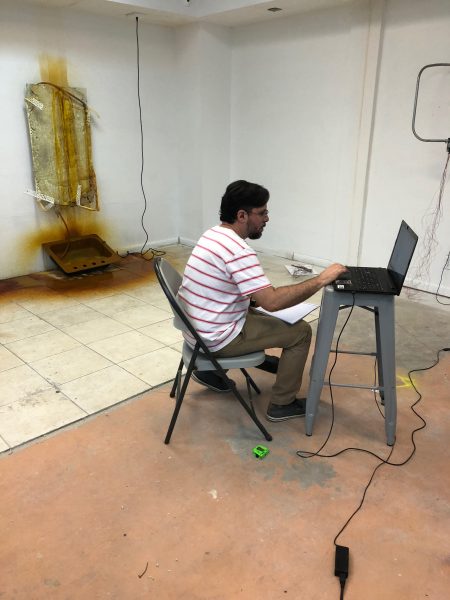 The aftermath of Hurricane Maria confirmed the ineptitude, corruption, and obsolescence of the government of Puerto Rico coupled with decades of colonial neglect and indifference by the federal government of the United States. Puerto Ricans are awakening from the illusion that the government serves the people’s interests. We have suffered emotional turmoil, financial crisis, loss of basic infrastructure, rampant unemployment, food shortage, plus widespread damage, destruction and loss of property. Neither the federal nor the colonial governments have attempted or been able to better the post hurricane situation in Puerto Rico and the citizens have had to take direct action to help the island and its people survive. We need to emerge from under the debris of the Estado Libre Asociado.
This project consists of works created from or referencing debris and wreckage and represent ideas about post-Maria Puerto Rico and the circumstances leading to the colonies current condition. Some pieces are interactive, requiring simple and physical direct or indirect  participation. Most consist of or are a result of a generative digital, electrical, or mechanical system. All produce sound. Most are connected to a central sound system in the project space.

• El gobierno no lo hizo, so we had to
◦ Wood, galvanized steel drywall framing studs, insulated wire, Bare Touch Board and Teensy 3.2 development board
◦ The physicality of this sculpture alludes to a leaning and almost fallen tree. It consists of 6 capacitive proximity sensors utilizing the framing studs: 3 control the pitch and the other 3 control the volume of 3 different sounding theremin-like synthesizers. It does not make any sound unless the sensors are activated by someone’s proximity. It can be activated by several people at the same time.
◦ After Hurricane Maria most roads and sidewalks were blocked by fallen trees and debris. Since the government was not removing the debris, the citizens had to come together to open access to roads and neighborhoods.
◦ Here is a demo of the piece in process: https://www.instagram.com/p/ BafM9wUlSrT/?taken-by=rafael.vargas.bernard
• Tenemos sed, ¿Where did our presupuesto nacional go?
◦ There will be two similar multiples of this piece
◦ Steel reinforcing mesh, vinyl tubing, concrete, roof sealant, fountain pump, steel kitchen sink, water and turmeric.
◦ The physicality of this sculpture alludes to water seeping down a wall; a common experience in homes during and after Maria. The water seeps down the “wall” into a sink and is cycled back up the “wall” through tubing (there is a constant loss of water due to spray and splashing resulting in a watermark around the sink).
◦ This is about public funds disappearing, seeping through government agencies, and being misappropriated specifically in the maintenance of public infrastructure resulting in a lack of running and drinking water for most.
◦ Here is a demo of the piece in process: https://www.instagram.com/p/ Ba2km18FwzG/?taken-by=rafael.vargas.bernard
• Se voló la puerta and everyone can see inside
◦ Found wooden door, tactile transducer speakers, insulated wire, teensy 3.2 development board, infrared proximity sensors, and acrylic paint
◦ The door is cut in half and rejoined to form a distorted V like shape (as if it were folded in half or like the wings of a bird). It has on its surface drawings of the direction of Hurricane Maria’s winds when it was centered on Puerto Rico and the hurricane’s trajectory over the island. These drawings on the door will have been produced and distorted by a vertical plotter. The door will shake as a result of a
sound frequency which is algorithmically related to the proximity of people to itself.
◦ As a result of the crisis and disaster caused by Maria, Puerto Rico’s colonial condition and trajectory has been exposed and communicated outside of the island. With more attention and analysis of the island’s situation, more effective action can
be taken by Puerto Rican citizens. Also, the hurricane made doors shake quite a lot.
◦ Just started the sculpture on Sunday, here it is in the beginning states of the drawing phase: https://www.instagram.com/p/BbKzt_-l_SU/?takenby= rafael.vargas.bernard
• There will be a serious of prints made with the vertical plotter from found images of post-Maria Puerto Rico.
◦ These prints can be “analyzed” by participants using an RGB color sensor which translates the frequencies of each color channel to separate audio sine waveforms which are then combined to produce a sound relative to each colors RGB values.
◦ Here is the prototype for the color scanning synthesizers: https://www.instagram.com/p/BazdAxpF0W1/?takenby=rafael.vargas.bernard
• There will be a serious of kinetic and sound sculptures made from electrical conduit, junction boxes and wiring. The wire in the pieces will move around erratically and the randomness and intensity of the movement will be affected by a person’s proximity.
The sound created by the sculptures will be generated by the line noise generated by the moving wires.
• There will be a serious of small concrete and debris sculptures with integrated USB flash drives each containing an audio composition recorded using the sound from all the works in the project.
PERFORMANCES:
• A live sound performance activating all the pieces in the project. I have invited the members of the local band Period Bomb (https://www.facebook.com/periodbomb/) to activate the pieces in the project under my direction and while I do some subtle sound
manipulation. I would like to do this twice or three times. I am also open to other collaborators for different activations of the space, but I haven’t met them yet. (I might just do this a couple of times with the members of the aforementioned collective).
• I would like to do a live noise set from my Calnepuelco project (https://soundcloud.com/ calnepuelco)
• I also have a movement and sound performance called Boricua Bestial where I put a contact microphone on a pvc pipe functioning as a flag pole for a weather-worn Puerto Rican Flag and do many aggressive movements and “dances” intimidating the public
attending the performance with the flag and the noises it makes until I finally give the flag over to the public and encourage them to break the flagpole. I could do this in the hallway between the exhibition spaces.
• I could do a half-hour workshop or session every day where people can sign up to jam with each-other and the pieces in my project guided by me.
• I think we should do like a panel or a talk with all the artist
• Needs: I’ll communicate them a little later

Donate Securely with PayPal, help us keep on posting.