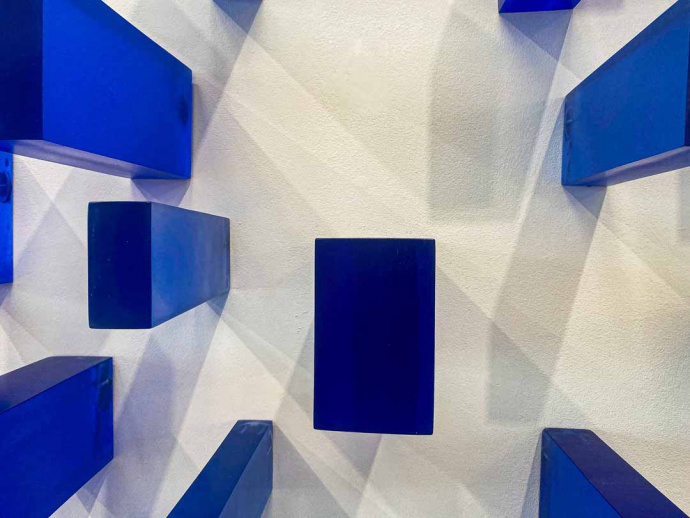 Richard Garet and Andres Michelena’s first collaborative exhibition, Revealing meditates upon the subtle nuances of space, matter, and subjectivity from a phenomenological yet poetic point of view.

Piero Atchugarry Gallery is pleased to announce Revealing, a dual exhibition of interwoven text, image, movement, and sound, by Richard Garet (b. 1972, Montevideo, Uruguay) and Andres Michelena (b. 1963, Caracas, Venezuela). Garet and Michelena have shared a friendship dating back to 2006, marked by mutual respect and a common interest in the concept of emptiness. Garets’s materials emerge from ontological investigations of background noise and the decadence-and-decay of technological utilities. He seeks to invert the normative function of background noise from unconscious status to active presence. In 2013 he was one of 16 artists to participate in “Soundings: A Contemporary Score”—the MoMA’s first major exhibition of sound art. Garet’s works are present in private and public collections of Cisneros Fontanals Art Foundation (CIFO), Merchant Logo Museum of Latin American Art (MOLAA), Sayago & Pardon, Julian Navarro, Alex Slato, Robert Bielecki, Michael Cohn, and Steve Comford, to name a few. If art is a language, what interests Andrés Michelena the most are its punctuation marks, its pauses, and its silences. In 2020 Michelena presented . . . the two—a solo exhibition at Piero Atchugarry Gallery—which, emblematic of his practice, was a mixture of poetry and installation generated from repurposed found materials. Michelena’s works are present in private and public collections like Estrellita Brodsky’s Collection, Brillembourg-Capriles Collection, Arturo Filio, Arturo Mosquera, Lothar Muller, Miami Dade College’s Collection, JCMAC, and MoLAA’s Permanent Collection, among others.

“I felt it was important to commemorate Hélène’s career. She was one of the first gallerists to venture outside of the motherland (Italy), her research was substantial and brave (spanning several countries and borders), discovering and nurturing several influential artists from the 2nd half of the 20th century.
She was able to establish herself in a time when female dealers were few and far between. In many ways, this show is about immortalizing history so as to not lose sight of the significance of what it means to be a gallerist.”

Starting on April 2nd 2022, Piero Atchugarry Gallery Miami will host the exhibition 50 Years, a Day. Studio la Città, a Story. Given the competitive nature of the art world, this exhibition constitutes an absolute oddity: an open dedication from gallerist to gallerist, and a tribute to 50 years of Studio la Città, which has contributed to defining the history of contemporary art in Italy.

Studio la Città was founded in 1969 in Verona by Hélène de Franchis. As Marco Meneguzzo – curator of the show – said: the role of a successful gallery owner imposes tiring rhythms, usually driven by the desire to assert one’s own taste rather than by any economic consideration. This is the only reason why one can resist for so long: it is an inner drive that determines the initial action, not the reasoning.

Today, the different phases of the extensive career of Hélène de Franchis, the core of Studio la Città, arrive in Miami. The exhibition brings overseas pieces that constitute a unique self-portrait of the gallery owner: choices that have contributed to identifying the mainstream of contemporary art today, other choices that are more personal, but never trivial or ephemeral, and which could contribute to future research in the still under-explored “pleats” of art history. By hosting a homage to a fellow gallerist, the exhibition introduces a continued development in the collaborative model that Piero Atchugarry Gallery has adopted in recent years. The result is a retrospective exhibition with carefully selected works including emblematic pieces by Stuart Arends, Gabriele Basilico, Pier Paolo Calzolari, Lawrence Carroll, Vincenzo Castella, Lynn Davis, Lucio Fontana, Alberto Garutti, Herbert Hamak, Jacob Hashimoto, Igino Legnaghi, David Leverett, Emil Lukas, Giulio Paolini, Michelangelo Pistoletto, David Simpson and Ettore Spalletti.