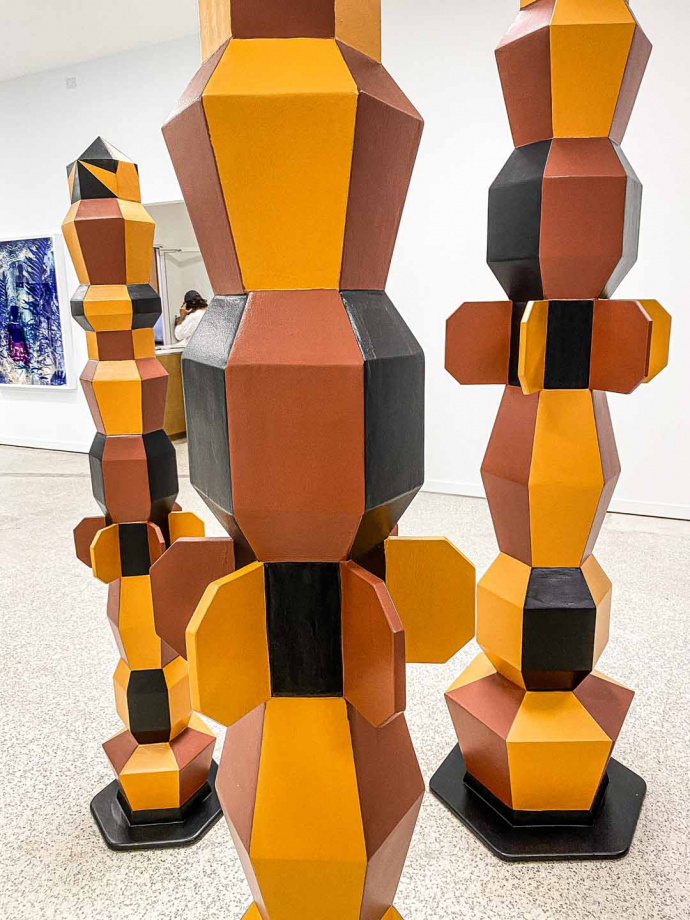 Onajide Shabaka: On the edge of tomorrows… @Emerson Dorsch gallery

Onajide Shabaka: On the edge of tomorrows…

Emerson Dorsch Gallery is proud to announce the exhibition Onajide Shabaka: On the edge of tomorrows…. A selection of works was made throughout Shabaka’s five-decade career.

“We said in our introduction that man was a yes. We shall never stop repeating it. Yes to life. Yes to love. Yes to generosity. But man is also a no. No to man’s contempt. No to the indignity of man. To the exploitation of man. To the massacre of what is most human in man: freedom… To induce man to be actional, by maintaining in his circularity the respect of the fundamental values that make the world human, that this is the task of utmost urgency for he who, after careful reflection, prepares to act.”

“A sacred experience then covered in smoke
In the boundless temple of heaven and its particles,
[a] Message from our ancestors
When the tears have stopped flowing and the blood is dried”

– Four titles of Onajide Shabaka’s artworks,
in order on the exhibition’s south wall

Shabaka has said of his practice: “…my work, in its engagement with nature, history, technology, and ritual – allows the viewers to experience a more holistic view of the world.”* The show is a remix, one that evokes the artist’s range of expression and the web of connections he makes between stories, ethnobotany, deep mapping, and anthropology, among many other themes. With his practice and work, the artist imbues into his practice a model of how one can hold accumulated memories of horrific truths in history and place while in the midst of a land’s beauty and persistence. The show includes a cross-section of media, from photography, mixed media collage on paper, to an artist book, watercolors, and prints. A trio of Shabaka’s totemic sculptures will be installed in front of a new mural, inspired by his college, You cannot know in advance what will happen (2021).

His video Silenced Histories (2019-21) will play concurrently during the exhibition as part of Emerson Dorsch Online (EDO), a video channel on the gallery’s website. Filmed while on a walk in the Gullah Geechee Cultural Corridor near the former lands of Major Pierce Butler’s plantation, the video documents how the histories in that place seem to be invisible, but, with the knowledge given forth by the credits, its dark pasts are more palpable, if ghostly.

The crisscrossing juxtapositions within the exhibition echo the connections Shabaka draws out, like constellations, between formal patterns in plants, and their uses in various cultures and migrations between them. He places planetary movements, in proximity to spirits sensed in the muck, to the religious practices of the African diaspora. And he accompanies these with collected stories of consciousness, grief, determination, resilience, and adaptation.

Emerson Dorsch would like to acknowledge those who helped bring this exhibition together: Onajide Shabaka, Sinisa Kukec, Scott “Rage” Johnson, Oliver Sanchez and the team at Swam Space Miami, Marcos Cherlo, Francesco Casale, Juan Gonzalez, and Daniel Clapp. Without your support, consistency, and tireless efforts, our exhibitions would not be possible. Thank you!

Onajide Shabaka (Born Cincinnati, OH 1948. Live and works Miami, FL) is concerned with historical and biographical themes related to geography, as well as other social and natural sciences that include African diaspora and Native American cultures. His practice spans methods and media including meditative walks, photography, watercolor, collage, printmaking, artist books, sculpture, and video. His research and writings are a vital part of the discourse surrounding his work. He studied at the California College of the Arts and Art Center College of Design and earned his MFA from Vermont College of Fine Arts. Shabaka has participated in numerous international art residencies, some established and others self-designed. Notable institutions in this residency list are Diaspora Vibe Cultural Arts Incubator (DVCAI); Oolite Arts, Miami Beach, FL; Anderson Ranch in Aspen, CO; Project Row Houses in Houston, TX, and Artist in Residence in the Everglades (AIRIE).

Shabaka has shown his work in solo exhibitions in South Florida, Houston, TX, and Potsdam, Germany, among others. His work has been included in numerous group shows over the years. Of these, recent showings include exhibitions at Project Row Houses in Houston, TX; Museum of Contemporary Art of North Miami; Locust Projects, Miami, FL; Oolite Arts, Miami Beach, FL; the Frost Art Museum, Miami, FL; The NSU Art Museum, Fort Lauderdale, FL; The Franklin, Chicago, IL; Edna Manley College of the Arts in Kingston, Jamaica; Cindy Rucker Gallery, New York, NY; Saltworks, Atlanta, GA; Everglades National Park Collection and Emerson Dorsch Gallery, to name a few. He has been the recipient of numerous grants and awards, including, recently, Locust Projects, The Ellies, Oolite Arts, Miami-Dade County Art In Public Places, and a Wavemaker Grant. His work is widely represented in Florida institutional collections as well as in a strong base of notable private collections. Recent shows and opportunities have highlighted his work in artist books, photography, and printmaking, resulting in collaborations with IS Projects and Nocturnal Press in Fort Lauderdale, FL, and Extra Virgin Press, Miami, FL.