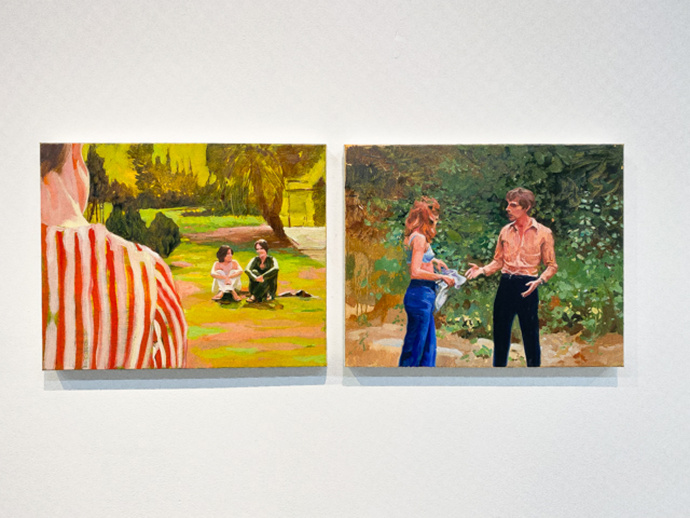 Pan American Art Projects is excited to announce ABCDEFG, a group show featuring the works of mainlyMiami based artists Paul Amundarain, Rigoberto Diaz, Filio Galvez, Delvin Lugo, Marlon Portales, Jorge Rios,and Leticia Sanchez Toledo. ABCDEFG will be on view from June 25 to August 20, 2022, with an openingreception for the artists on Saturday, June 25, from 6 to 9 pm.ABCDEFG brings together seven practices through which artists articulate their own forms of commonsthrough painting. In this exhibition, different artistic manifestations coexist, such as painting in its mostacademic representation, an expanded and contemporary version, as well as non-traditional interpretationsinvolving drawing, and installation.This show is a frivolous ode to the complexity of the culture of our days, its meta definitions, hypersensitivity,and automation: it is a call to attention to the details of life, to what we are. It is why we quote Rosalía’s song“ABCDEFG”, where the singer returns to the primitive and simple way of associating the letters of thealphabet with words, expressions, and events that are in popular slang. She omits letters, she makes upwords or “miswrites” them. It is a break from over-thinking the conceptual searching in life, which looks morebeautiful the simpler it is.ABCDEFG will be accompanied by scheduled programming of movie screenings curated by Filio Galvez.–“ABCDEFG” – RosalíaA de alta, altura, alienB de bandidaC de coquetaD de dinamitaE de expensiva, emperatriz, enigma, enteradaF de Flux AeonG de guapaH de honduraI de inteligencia artificialJ de jinetaM de motomami, motomami, motomamiMotomami, motomamiN de “Ni se te ocurra ni pensarlo”O de orquídeaP de patronaQ de qué reinonaR de racineta, racineta, rangoRacineta, rangoS de sataT de titánicaU de ultrasonidosV de vendettaW de Willy ColonDe Winterfall tambiénX de “Te despejo la X en un momento”Y de yenes, de yantasY Z de zarzamora, o de zapateao’, o de zorratambién

PAUL AMUNDARAINBorn in Caracas in 1985, Paul Amundarain began studying Architecture, but soon became interested inproducing art, and instead pursued different design and sculpture workshops where he could develop hiscreative impulse. He has exhibited largely in Maracaibo and Caracas in collective shows and local art fairs,and has had four solo exhibitions in Venezuela, at Viloria Blanco Gallery in Maracaibo, and ParenthesisGallery in Caracas. Paul Amundarain lives and works between Caracas and Miami.Paul Amundarain belongs to a generation that received the legacy of the grid already deconstructed. The gridallowed modernity to be structured and art to be reorganized. His research tries to solve social problemsusing technological processes as a record of his own experiences.His largest series of assemblages titled Urban Skins and Anarchical Skins are a visual synthesis of whatCaracas looks like from above, intending to analyze and reflect upon the social circumstances and irrationalitythat prevail in this chaotic urban development. Amundarain departs from the overhead shots taken from thecity’s barrios (slums) as a model and dissects its landscape formed by the geometric shapes of the roofs ofmillions of ranchos (favelas). He uses Aluminum triangle and square blade-like shapes that overlap thebi-dimensional surface and produces volumetric assemblages that suggest not only the violence but alsothe unruly and massive informal habitable solutions of poverty.In other bodies of work, Amundarain is reflecting upon Venezuela’s conflictive street violence to generatepaintings, sculptures, and installations, thinking about the unfortunate popular culture icons of violence in thecontext of their own reality, in which the whole city becomes a crime scene at large. It is quite common intoday’s Caracas to find its urban landscape scarred with physical evidence of this violence, such as thetraces left from bullets in street signs, protection barriers on roads, and damaged infrastructure that presentvestiges of thuggery. In his series Impact, Amundarain perforates aluminum surfaces painted in gold with realbullets, or as in Formal Subtraction where he removes highway safety barriers that have been damaged bycar crashes or bullets, and alters them into sculptures, not before intervening them with paint or chromingtheir surfaces.With his work, Amundarain is commenting on the social scenario of a system that has progressively fallenon hard times, using a visual strategy that pertains to Venezuela ́s rooted art historiography within thedisciplinary boundaries of geometric abstraction

RIGOBERTO DIAZRigoberto Diaz’ artistic proposal is a means of research and experimentation, an analytical instrument thatdialogues about the entities where it develops and new forms of relationships are created. Each space is aworld of dissimilar analogies which he is interested in investigating to create a work that links with thepasser-by and the environment, obtaining a flow of data between the work and the public. Diaz’ conceptualand formal codes are within and outside the limits of the installation, public interventions, Site Specific,photography and works with a procedural nature. Using a group of practices allows him to organize fieldwork in the established area. The study of physical and symbolic space is a constant in his work, where hedevelops works that investigate memory, power, and waste as traces of behaviors that inhabit a space.In his latest series, Location Intelligence, he makes drawings with Roomba vacuum cleaners based on theirgeolocation. Intervention in private spaces where they are used as limits to create localization patterns andpre-design of the area. Artificial intelligence creates patterns of behaviors to delimit obstacles. These vacuumcleaners use Location Intelligence: it is the process of obtaining a meaningful view of geospatial datarelationships to solve a particular problem – the ability to understand or learn, or the ability to applyknowledge to manage the EnvironmentDiaz develops works that explore space as a symbolic platform to generate reflections and questions aboutmemory. At the same time, he’s interested in space as a system in which life forms, behaviors, andinformation is constantly being produced. As he approaches these dynamics, Diaz tries to find newinterstices that make visible and understand these areas of the confluence of relationships. The scope of actionis extensive: libraries, warehouses, housing prototypes, schools, publishing houses, shelters, prisons, politicalinstitutions, etc. That is why his actions are not reduced to the gallery space but interact with lessconventional scenarios than the art circuit.

FILIO GALVEZFilio Galvez was born in Havana, Cuba, where he studied at the renowned National Academy of Fine Art SanAlejandro. Upon moving to Miami, he enrolled in the Visual Arts Degree program at the New School of the Arts(NWSA).Using digital data for aesthetic purposes by either corrupting or physically manipulating electronic devices isa common denominator in Galvez’s practice. The attention to this operative principle, rather than the politicsof form, is the basis of the present research. The results are not those from a lab, they are expresslysubjective, necessarily subjective to lend subjectivity to a platform of communication, and they play with thenightmare of the self-conscious data.In his series R.I.P (Reverse Image Painting), Galvez attempts to automate the process of artistic creation. Thereference images that are reproduced are found through various search engines, always starting from anabstraction; this process is repeated until the compositions are completed.

DELVIN LUGOIn Delvin Lugo’s current series of paintings Early Life in Neon, the artist revisits memories from his hometownin Moncion, Dominican Republic. In these vibrant works, Lugo highlights positive, nurturing, and comicaspects of the rural life his family lived prior to their emigration to the United States when he was twelve yearsold.Resourcefulness and improvisation were intertwined with his earliest expressions of identity as a gay boyinterested in fashion and the fabulous: wearing one of his mother’s earrings or having a homemade Barbiedoll are celebrated in these paintings. Highlighting the retrospectively humorous elements of these earlyexpressions is also essential in this series. Years before Lugo (or his family members) learned to speakEnglish his favorite t-shirt bore the slogan “Bitch, Bitch, Bitch!” and he proudly showcases it here. This boldapproach to life is manifested and amplified through the use of vibrant and fluorescent colors in the paintings.To accentuate the spirit of playfulness, these paintings can also be viewed in black light. In any light, though,they are full of delight, resilience, and tenacious joy.Delvin attended the Maine College of Art and received a BFA from the School of Visual Arts. He currentlyresides in New York City.

MARLON PORTALESThe emerging Cuban artist Marlon Portales (Pinar del Rio, 1991) graduated in 2018 from Havana’s HigherInstitute of Art (ISA) with honors. Portales’ practice is multidisciplinary and includes media ranging frompainting to installation, video art, photography, and performance. His views in the fields of politics and idealsyield works that carry evident sociological and philosophical quests. Ultimately, through his work, he aims atengaging the observer in a dialogue about different points of view as well as universally shared reflections.His series Retiro Coyuntural emerged within the most intimate space-time (less exposed and known) of theartist’s life from the end of 2019 until the present day. This series narrates from an essentially visualperspective, events, interactions, interventions, and relationships with the spaces of his immediate context.The works, apparently unrelated, have a strong thread that binds them together as a total idea, becomingremnants of his everyday life.Portales has ventured into a journey of escape and oxygenation, practically of flight, from those culturalimperatives that his life in Cuba had imposed on his work. The works are almost a poetic documentation ofthis stage where the political, religious, and social margins are lost and linked. He experiences this journeywith the notion of Homo picture, as an avid producer and consumer of images who extracts a visual residuefrom each experience.

ORGE RIOSJorge Rios holds a BA in painting from the National Academy of Arts “San Alejandro” in Havana, Cuba. In2021 earned his BFA at The School of the Art Institute of Chicago; he is currently enrolled in the MFAprogram at Washington University in St. Louis.The work of Jorge Rios transcends the flatness of ordinary visual language reaching the subtlety,ambivalence, and complexity that we perceive more clearly in other art forms such as music or poetry. Riostries to establish through his art a link between the individual experience of reality and the totality of existence– whether you call it God, the Truth, the Idea, the Spirit, the Da-sein, the Being, or the Nothingness… In otherwords, “art for me has the mission of redeeming the being out of the mundanity of the human condition, bystimulating what is divine, universal and eternal in it.”

LETICIA SANCHEZ TOLEDOMiami-based contemporary visual artist Leticia Sánchez Toledo was born in 1985 and is of Cuban andSpanish descent. She is well-known for her personal depictions of women and scenes of women that areinfluenced by her passion for movies, where color and light play key roles in evoking a certain aura oratmosphere.She spent her childhood learning about the world through the big screen at the nearby movie theater in thelittle town where she lived. Today Leticia offers a personal view of her wishes and concerns while alsoexamining social, cultural, and ethnic issues that are present in the lives of women today. She does this as amental challenge and by using film-like frames to communicate her point of view in the social space.