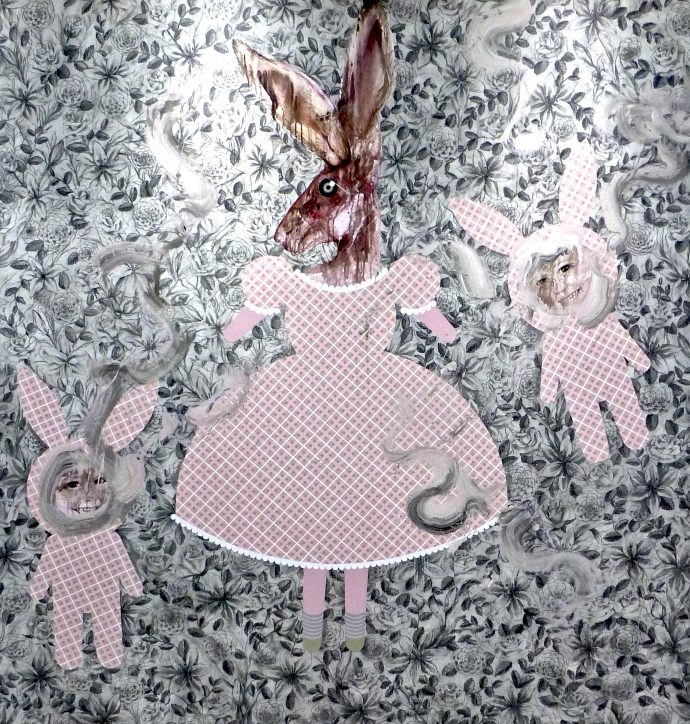 An exhibition that examines the work of four young local artists who use a traditional medium to express themselves in surprising ways. In the age of multimedia and conceptual art, taking up brushes and easel is a radical step, but when it is achieved with high aesthetic values it is a reason for recognition.

He completed studies at the Real Institute of Art (Stockholm, Sweden, 2012). Graduated from the Higher Institute of Art (Havana, Cuba, 2012) His works are included in private collections in Cuba, USA., Canada, Sweden, Luxemburg, and Spain.
“Maikel is, in his essence and difference, an authentic heir of that rich pictorial tradition. His poetics are based on the territories of that previous art, but it´s sealed under the sign of a powerful singularity. I could go through the halls of a thousand museums in the world and safely recognize the presence of his work. His fictional constructions and compositional juggling have the weight of a cosmos. In some way, I think his pieces present as a kind of anachronistic story in which lyricism and derision alternate. I suspect he´s ignorant about it, but Maikel is, unmistakably, a rabid poet. He is a Dandy of seduction, and androgyny in a surface. From his canvases emanates a sweet and bitter breath, a hint of birth that rivals the threat of an announced death. His paintings seem to belong to cosmogony as well as to literature. They engender, increase, and compose the vocabulary of a rugged sexuality. The libidinal revolution resolved in them is directly proportional to their clinical sterility. The legitimacy of his paintings becomes manifest when, from their discursive regency, they are able to recognize their imperfection and human vulnerability. They do not reduce the spectacle of life to equivalences or mocks, but celebrate the vital drive in the mirror of the futile and the funereal.”
Fragment retired from the essay written for the exhibition by Andrés Isaac Santana.

Isle of Pines 1974, completed studies at the academy of fine arts wifredo lam Isle of Pines 1996, during his years of study he was able to experiment with ceramics, which is also one of the techniques dominated by the artist, He has been a professor of drawing and design at the same academy where he graduated, his beginnings in the painting in the second half of the decade of the nineties, were based on realistic miniatures where he sketched a Cuban reality plagued by vices, lack of principles and scarcity, he has participated in several exhibitions inside and outside his native country Cuba, has several awards and mentions, in the year 1998 He travels to the United States due to a scholarship granted by the Vermont Art Center, his works were chosen by the degree of mastery achieved on small scale, Yourden was established in the city of Naples Florida where he has his painting studio.
The artistic biography of Yourden Ricardo (Isla de Pinos, 1974) may well have begun quite long before his arrival in the world. Such a hypothesis probably sounds as divertimento, as a crazy joke, but for the author, it would not be incongruent with his conception of impermanence, since from his spiritualism he considers that the human life flows in inexorable cycles through the times. When at some point the painter and I commented on that encounter by chance between Giorgio de Chirico and Carlo Carra, at the Military Hospital of Ferrara in 1916, an event that would not only mark the beginning of a deep friendship, but also the birth of what was made itself known as metaphysical painting, Ricardo became aware of the details, but welcomed the event without being disturbed, as a consubstantial precedent of his own concerns. The paintings of those precursors of Surrealism, who were joined later by Alberto Savinio, Giorgio Morandi, and Filippo de Pisis, emerged from the need to explore into the inner energy that they attributed to an object or an icon when it was alienated from its environment. In that obsession to delve into inaccessible areas of the reality, the group broke with the Puritan reproduction by dislocating the conventional orders and by making way for a subjectivity more connected to the unconscious than to rational flows.
Fragment retired from the essay written for the exhibition by Jesús Rosado.

was born in Havana, Cuba in 1989. In 2005 he immigrated with his family to the United States and settled in Miami, Florida. He attended art school at Miami Dade College and Florida International University, obtaining from the latter a BFA in painting in 2012. Later in 2016, he would graduate from the University of Florida with an MFA in painting. Saludes´ work is currently in private collections around Florida, as well as in New York, and New Orleans.
Saludes’ current work presents a duality. On the one hand, his paintings of flat horizon-less landscapes reveal a reclusive, introverted self. Facing a close subject, the painter finds asylum in a time and space that provide immediate comfort and familiarity. Through his open-field landscapes, on the other hand, he turns to contemplate and pictorially represent the larger picture that his adoptive home (America) encompasses. Saludes’ most recent paintings honor the landscape of his home state of Florida, which the artist now scrutinizes with a sensibility akin to his Cuban artistic forefathers, as they once saw and idealized the Cuban countryside.

was born in 1989 in Miami, Florida, son of a working-class family. His father, a self-employed handyman, is from Santiago de Cuba, Cuba and immigrated to the United States soon after Fidel Castro’s takeover of the island nation. His mother, a self-employed housekeeper, is from San Pedro Sula, Honduras and immigrated to the United States in search of a life better than in poverty-stricken, crime-ridden Honduras. Labañino was raised in Little Havana, one of Miami’s most historic neighborhoods as well as one of its most impoverished, but opportunely attended South Miami Senior High Magnet School of the Arts’ magnet program for Fine Art, graduating in 2008. He then attended Miami Dade College—the first in his family to go to college—and thereafter went on to earn his Bachelor of Fine Arts degree (specialty in Painting, with a minor in Art History) cum laude from Florida International University in 2012. He currently lives and works in Miami, Florida.
Alvaro Labañino creates paintings that function as thresholds to his mind. Through his artworks, he exposes a world of thoughts, life experiences, dreams, nightmares, and fears which he often materializes in the form of personal objects, domestic spaces, and landscapes. His works focus on his immediate and private retreats, as well as on his purposeful travels outside of the United States. Labañino saturates the commonplace with significance and emotion, often portraying the whereabouts of his native Little Havana or the interior of his studio-apartment. The spaces are devoid of the human figure and describe the solitude that he habitually seeks, and which life sometimes imposes without invitation. His artworks are demonstrative of these reticent feelings. His paintings are methodically structured, despite that, they may be sometimes somewhat enigmatic in their breakdown. Often, images are segmented into flat areas of colors and contours that interact in varying intensities and temperatures that communicate the artist’s intended temperament.

We love this show it moves from the visceral to the mundane, a well organized and curated show, we hope all have a chance to see it, We thank the Artist, and the Gallery.